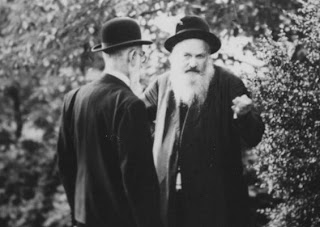 This Friday, 13 Tamuz is the 66th yahrzeit of Reb Elchonon Bunim Wasserman. One just has to say "Reb Elchonon" and everyone knows who you're referring to. He was a talmid of the Chofetz Chaim and was Rosh Yeshiva of Baranovitch. His seforim are widely used in Yeshivas and include Kovetz Heoros, Kovetz Shiurim, Kovetz Maamarim and Ikvasa D'Meshicha. Reb Elchonon was murdered in cold blood together with many other Jews, when the Nazia y's, entered . Reb Ephraim Oshry, who was a Rov on the Lower East Side of Manhattan, was 27 years old at that time; he was one of the few that managed to escape. He related over the following about the last thing Reb Elchonon told them.

When they saw the end was near Reb Elchonon got up and spoke to them. He spoke the same way he always did; he was calm and there was no indication of panic. He said the following:

"In Heaven it seems that they deem us to be tzadikim, because we have been chosen to be korbonos for Klal Yisroel. Therefore, we must do teshuvah now. We don't have much time. We must keep in mind that we will be better korbonos if we do teshuvah. In this way we will save the Yidden in . Let no foreign thought enter our minds, Chas V'Shalom, as that will make us pigul, an unfit korban. We are now fulfilling the greatest mitzvah; Yerushalayim was destroyed with fire and will be rebuilt with fire. The same fire that will consume our bodies will one day rebuild Klal Yisroel."

13 Tamuz is also the yahrzeit of: