21 Kislev - R' Shlomo Zalman ben R' Moshe Dovid Friedman ofTenka (1999) He was already a great Rov while in . He lived in , where he was well known as a tzadik. He was very close with the gedolim of his time including R' Moshe Feinstein and the Satmar Rebbe, who he is buried close to.

22 Kislev - R' Eliezer Ashkenazi (1586), author of Maasei Hashem. He was a contemporary of the Maharal

24 Kislev - R' Avrohom ben R' Shmuel Abulafia (died after 1291), From the early mekubalim, he authored many seforim, among them sefer Hayashar and Imrei Shefer (1291)

24 Kislev - R' Shmuel Yitzchok ben R' Yehuda Rosenfeld (1850), Rov of Tcherin, he was a talmid of R' Nachman Breslover and accompanied him on his mysterious trip in 1807. 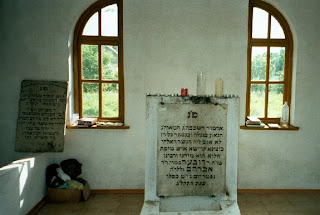 (Picture courtesy of A Simple Jew.
Click on the picture to see
his posting on Yud-Tes Kislev.)
19 Kislev is the yartzeit of Magid of Mezritch, Reb Dov Ber ben Reb Avrohom ZY"A. When he was a little boy, his house burnt down, and he saw his mother crying. He asked: "why are you crying; it's only a house?" Hi mother responded that she wasn't crying over the house, but over the burnt up family tree, showing their lineage back to Rav Yochonan HaSandler. The little Dov Ber responded: "Don't worry; a new lineage will start with me." As they say, the rest his history. See Heichal HaNegina for more.

Segula from Reb Boruch of Mezhibuz 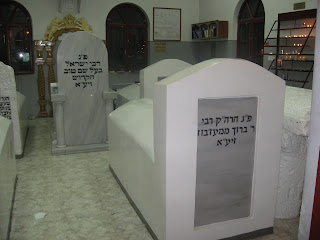 Chai Kislev is the yartzeit of Reb Boruch'l of Mezhibuz. He was born in 5613 (1752-53) to his father, Reb Yechiel "Der Deitshel" Ashkenazi, a great mekubal from , and his mother, Udel, daughter of the Baal Shem Tov. Her name was spelled אדל, which the Baal Shem Tov said stood for אֵ׳שׁ דָּ׳ת לָ׳מוֹ. His older brother was Reb Moshe Chaim Ephraim of Sudlikov, author of Degel Machane Ephraim, and his sister was Fayga, mother of Reb Nachman of Breslov. His teachings are collected in Sefer Botzina D'Nehora.

Holy from the womb

When Reb Boruch first started learning Gemara, the melamed opened the Gemara to the first page, which is amud beis, but Reb Boruch said, "lets start from amud aleph, the front cover". He turned to the cover, which read קמא בבא, and said, "the letters stand for ב׳רוך ב׳ן א׳דל ק׳דוש מ׳בטן א׳מו - Boruch, son of Udel, holy from the womb of his mother".

Why Reb Boruch laughed at the Berditchiver

Reb Dovid Moshe of Chortkov, in Divrei Dovid, says that Reb Boruch was known to make fun of the holy, Reb Levi Yitzchok of Berditchev. Once, Reb Moshe of Zvhil (son of the Zlotchover Magid) was by Reb Boruch and witnessed this. There was a man, Reb Yaakovka Mohliver, whose job was to entertain Reb Boruch by imitating the movements and gyrations that Reb Levi Yitzchok would do while performing various mitzvos. Reb Boruch would laugh and joke at this openly. Reb Moshe couldn't believe it; here was Reb Boruch making fun of one of the greatest tzadikim of his time. He let his thoughts be known to Reb Boruch, who explained himself.

He said that the Mekatreg comes before Hashem and says, "what need is there for Moshiach and the Beis Hamikdash? The Berditchiver in all his actions has in mind all the kavanos that the Kohen has in the Beis Hamikdash." "Therefore", said Reb Boruch, "I make fun of the actions of the Berditchiver in order to annul the words of the Mekatreg, since I make it seem that they are meaningless. In truth though, I know and believe that Reb Levi Yitzchok is a great tzadik."

Reb Boruch'l also made machlokes on his nephew, Reb Nachman of Breslov. When Reb Nachman's mother, Fayga, complained to Reb Boruch, he replied that without his making machlokes on her son, Reb Nachman wouldn't be able to survive on this world. Perhaps, this can be explained by a piece of Likutei Mohoran, which was my impetus to write this, since the first thing to pop into my head at that point was Reb Boruch'l.

In Likutei Mohoran 88, Reb Nachman says that shefa and brocha can only come down to this world through a tzadik, because a tzadik is the only one that has what is necessary to accept the shefa and brocha, namely Ahava and Yirah. A tzadik has to hide these traits so the mekatrim won't steal them from him. That's what the posuk in Tehilim (147, 8) means, הַמְכַסֶּה שָׁמַיִם בְּעָבִים, "He covers the Heaven with clouds", meaning the tzadik has to cover the fire and water, which is his Ahava and Yirah. The posuk continues הַמֵּכִין לָאָרֶץ מָטָר, "Who prepares dew for the earth", meaning shefa and brocha (represented by the word מָטָר) comes down to the earth. But, if a tzadik is well known, and can't hide his Ahava and Yirah, then the mekatrigim can prevent the shefa from coming down. Therefore, Hakodosh Boruch Hu puts it into the heart of a second tzadik to make machlokes on him in order to cover the Ahava and Yirah of the first tzadik, allowing the shefa to come down. This is what it means when it says מחלוקת שהוא לשם שמים, "machlokes that is for the sake of Heaven" - a machlokes for the sake of a tzadik who is called שמים, because he has Ahava and Yirah, in order to bring down the מָטָר, which is the bechina of shefa and brocha.

This can explain the machlokes that Reb Boruch made on the Berditchiver and Reb Nachman and many other controversies between tzadikim. May this be the only type of machlokes in our midst and may we receive much shefa and brocha from Above.

Reb Boruch would teach and rebuke in, what seemed like, a very harsh manner. To prove he was correct in doing this he would quote the posuk (Lech Lecha 12, 5)וְאֶת-הַנֶּפֶשׁ אֲשֶׁר-עָשׂוּ בְחָרָן , and the souls that they made in Charan. (This is referring to the people that Avrohom and Sarah taught about Hashem) He said that the word חָרָן should be read as חָרֺן, anger, meaning, Avrohom Avinu accomplished his task by using anger. When Reb Boruch passed away in 5672/1811, his talmidim found a Zohar open at a part that says: "There are two types of anger. One type of anger is blessed in the World Above and the World Below; its name is Boruch…"

One thing we can learn out from Reb Boruch'l is that. at times, tzadikim may seem to do things that defy logic, but there can be many lofty intentions behind them. Reb Boruch'l is buried in Mezhibuz, right next to the Baal Shem Tov, his father, his brother and many other great tzadikim.

May the zchus of Reb Boruch ben Reb Yechiel

protect us and all of Klal Yisroel

See A Simple Jew's Chanuka Campaign for Eizer L'Shabbos, helping out our needy brothers and sisters in Tsfat.
Posted by A Talmid at 11/19/2007 10:39:00 PM 1 comment: Links to this post

I received the following from Yitz of Heichal HaNegina :

In Sefer Yashar, it is quoted in the name of the Ramban that the ninth hour of the ninth day of the nine month is a special time for davening to Hashem.

THIS IS TOMORROW MONDAY, 9 Kislev,  BETWEEN IPM AND 2PM (Note: The exact time will vary depending on your location.)

11 Kislev - R' Yitzchak ben R' Yisroel Friedman of Sadiger (1924) Great-grandson of the Rizhiner. He died on a visit to the USA at the age of 39. He is buried in Queens, NY at Mt. Zion Cemetery.

11 Kislev - R' Tzvi Aryeh Ben-Zion ben R' Yisroel Abba Rosenfeld (1978) Responsible for spreading Breslov in the USA. He was a descendant of R' Ahron of Breslov and the Tcheriber Rov. He gave many shiurim aon Reb Nachman's teachings in English. You can listen to them here.

12 Kislev - R' Avrohom Dov ben R' Dovid of Averitch (1840) Talmid of R' Nochum and R' Motel of Chernobyl. Author of Bas Ayin. He moved to Tzfas, Eretz Yisroel and is buried there. His shul still stands, after surviving the famous earthquake.

The Shevatim and Shemona Esrei

The Avot (Patriarchs) established the three daily tefilot (prayers; Berakhot 26b). The aspect of prayer which makes it an expression of love and bonding with God is represented by Avraham Avinu (our Patriarch). To pray well, and sometimes merely to pray at all, takes strength and dedication. This is represented by Yitzchak Avinu. Yaakov Avinu, however, is the perfection of prayer as indicated by his "perfect bed," the fact that all his children followed in his footsteps and believed in the One God. This indicates that he unified the Shekhinah with Her Beloved. That union provides all of creation with peace, prosperity and joy.

The first and last three blessings of the Shemonah Esrei (aka Amidah) parallel the Avot, but the bulk of the of the weekday Shemonah Esrei, in which we humbly request prosperity in its various forms, parallels the Twelve Tribes. Reb Noson gives us some insight and inspiration by aligning the middle blessings with the Twelve Tribes. To keep the chart to a convenient size for those who wish to print it and keep it in their siddur (prayerbook), I chose brevity over elaboration. (The numbers in the first column indicate where in the order of Shemonah Esrei the blessing is. For example, 1/4 means , first of the middle/weekday blessings, fourth overall.)

23 Cheshvan - R' Aharon Katzenellenbogen of Brisk, author of Minchas Aharon (1854)
23 Cheshvan - R' Moshe ben R' Yaakov Leib Midner (1929), a talmid of the Slonimer Rebbes. He was known as a Baal Ruach HaKodesh. R' Elchonon Wasserman would stand up for him out of respect. He put together the sefer Toras Avos, which contains Torah from the Rebbes of Lechovitch, Kobrin and Slonim.
23 Cheshvan - R' Yehosef ben R' Tzvi Rottenberg of Koson (1911) son-in-law of R' Meshulam Feivish of Tosh

24 Cheshvan - R' Refoel HaKohen of ben R' Yekusiel Ziskind (1803) Learned by the Shaagas Aryeh and Vilna Gaon. He was a Rebbe of R' Chaim of Volozhin. He became close with the Mezritcher Magid. Wrote Toras Yekusiel. (some have the date as 26 Cheshvan)