The Bitul of the Degel Machane Ephraim 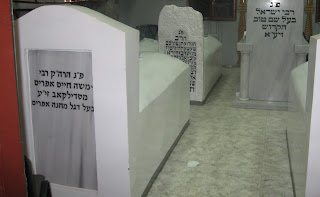 This is written Li’iluiy Nishmas the great tzadik, Reb Moshe Chaim Ephraim ben Reb Yechiel ZY”A (1748-1800), the Rebbe of the town of Sudlikov, best known by the title of his sefer, Degel Machane Ephraim. The yartzeit is today, 17 Iyar. His father, Reb Yechiel "Der Deitshel" Ashkenazi, was a great mekubal from Germany, and his mother, Udel, was the daughter of the Baal Shem Tov. Her name was spelled אדל, which the Baal Shem Tov said stood for אֵ׳שׁ דָּ׳ת לָ׳מוֹ – “a fiery Torah to them” (V’zos HaBracha 33, 2). His younger brother was Reb Boruch of Mezhibuz, and his sister was Fayga, mother of Reb Nachman of Breslov. A wealth of Torah from the Degel and other information can be found at A Simple Jew.

This whole post came about as the result of a question he asked me regarding my understanding of a piece of Degel. Therefore, it is in his merit that this was written. I have gone to daven at the Degel’s kever many times (he is buried in the same Ohel as the Baal Shem Tov), and therefore feel it is a great zchus that I was able to put this together. What is written below is based on my limited understanding; if anyone understands the material differently, feel free to comment.

Alone with Hashem
In at least four places the Degel mentions the teaching of Reb Nachman Horedenker on the verse: וְאִישׁ לֹא-יַעֲלֶה עִמָּךְ וְגַם-אִישׁ אַל-יֵרָא בְּכָל-הָהָר - “No man shall go up with you, and also no man shall be seen throughout the mountain” (Shemos 34, 3). We can learn out from this that when one wants to serve Hashem, he needs to imagine as if there is no one else in the world but himself. The Degel then uses this teaching to explain several other verses. I believe the reason why the Degel wrote on this so many times was because this was something he worked on, and he reached the level he speaks of, as we will see at the end.

Parshas Emor
Degel Machane Ephraim discusses how at times a tzadik can fall into the sins of the common folk of his generation. For example, if they are accustomed to levity, he may act in a light headed manner occasionally, so that he won’t be looked at as a fool by the people. The first verse of Parshas Emor cautions tzadikim to be wary of this. It reads וַיֹּאמֶר ה׳ אֶל-מֹשֶׁה אֱמֹר אֶל-הַכֹּהֲנִים בְּנֵי אַהֲרֹן וְאָמַרְתָּ אֲלֵהֶם לְנֶפֶשׁ לֹא-יִטַּמָּא בְּעַמָּיו- meaning: Kohanim, a reference to those who serve Hashem, should not contaminate their souls with those improper things done by the “עם”, the common folk. This is the meaning of what Hillel said (Avos 2, 6) ובמקום שאין אנשים, השתדל להיות איש. One should strive to be a man, and act in a way as if there are no other people (meaning those that do improper things). This is in accordance with the words of Reb Nachman Horedeker above; one should act as if there is no one else, in order that he won’t learn improper things from them.

Parshas Shelach & Matos
In both of these sections the Degel explains the following verse again according to the same teaching: וְכָל-אָדָם לֹא-יִהְיֶה בְּאֹהֶל מוֹעֵד, בְּבֹאוֹ לְכַפֵּר בַּקֹּדֶשׁ--עַד-צֵאתוֹ; וְכִפֶּר בַּעֲדוֹ וּבְעַד בֵּיתוֹ, וּבְעַד כָּל-קְהַל יִשְׂרָאֵל - “And there shall be no man in the tent of meeting when he goes in to make atonement in the holy place, until he come out, and has made atonement for himself, and for his household, and for all the assembly of Israel” (Emor 16, 17). Again, this verse his teaching us that when one wants to serve Hashem truthfully he needs to imagine there is no one else there. He says “understand this”. The way I understand this is that when one goes to engage in hisbodedus (personal prayer, in which one tries to make atonement, as stated in the verse) he should do so in solitude, and in a state of mind where no one else but him and Hashem.

Parshas Ha’azinu
The Degel explains the verse ה׳ בָּדָד יַנְחֶנּוּ וְאֵין עִמּוֹ אֵל נֵכָר – “Hashem alone lead him, and there was not with Him a strange god”, once again bringing Reb Nachman Horedenker on the verse וְאִישׁ לֹא-יַעֲלֶה עִמָּךְ. The Degel then mentions the verse (Devarim 11, 16) וְסַרְתֶּם, וַעֲבַדְתֶּם אֱלֹהִים אֲחֵרִים – “you will turn and serve other gods” and says “but, when a person is “yichidi” (“alone”, which could imply without other people in his mind, or engaged in Hisbodedus) he attaches himself with the “Yichudo Shel Olam” (Hashem), and then וְאֵין עִמּוֹ אֵל נֵכָר, there is not with him any strange god - only Hashem. The way I understand the verse ה׳ בָּדָד יַנְחֶנּוּ וְאֵין עִמּוֹ אֵל נֵכָר is: When one has no strange god, meaning that he is not thinking about anything but Hashem (strange god does not necessarily mean idols or worshipping the sun, chas v’Sholom; it can be money, power, fame, etc.) while engaged in Hisbodedus then Hashem will lead him, because he is attached to Him, as mentioned.

Similarity in Likutei Mohoran
On several occasions, ASJ wrote about similarities between Degel Machane Ephraim and Likutei Mohoran. Here is another similarity. In Likutei Mohoran (1, 52) Reb Nachman of Breslov (grandson of Reb Nachman Horedenker) says that the only way to come to “bitul” (self nullification) and include himself in the “Mechuyav Hamitziyus”, meaning Hashem, is through hisbodedus. (Hashem is “Mechuyav Hamitziyus”, he needs to exist, as opposed to the world which only exists because Hashem wills it). This is learnt from the Mishna (Avos 3, 5) חנניה בן חכינאי אומר, הניעור בלילה If one is awake at night. והמהלך בדרך יחידי and he goes to do hisbodedus in a place where other people don’t go, because in such a place he can come to “bitul”. והמפנה ליבו להבטלה He takes his mind off of all earthly matters in order to arrive at “bitul”. Then he will be able to include his soul and the entire world in the “Mechuyav Hamitziyus”.הרי זה מתחייב בנפשו his soul together with the entire world becomes included in the “Mechuyav Hamitziyus” (through his self nullification, he becomes nothing, making this possible).

In the “Hashmata” to the second section of Likutei Mohoran, he says on the verse אֶחָד הָיָה אַבְרָהָם – “one was Avraham” (Yechezkel 33, 24) that Avrohom acted as if he was the only one in the world and didn’t pay any attention to anyone else in the world. That is the meaning of אֶחָד הָיָה אַבְרָהָם. Similarly, when one wants to serve Hashem, he needs to imagine as if nobody else exists in the world. In this way, he won’t pay attention to any people, even relatives, who try to discourage him or mock him. He should also ignore any obstacles that get in his way that try to prevent him from serving Hashem properly.

Putting it all together
Reb Nachman Horedenker, Degel Machane Ephraim and Reb Nachman of Breslov all seem to be saying that one should speak to Hashem in a completely private place, and in such a way, one can come to “bitul”. Elsewhere in Likutei Mohoran (2, 103) it says that it is not good if one hears or feels that there is someone else next to him while praying. One needs to imagine in his mind as if it is only him and Hashem alone. (See also Likutei Mohoran 1, 55) This lesson can also be applied to the previous teachings of the Horedenker and Degel. Even if one is among people, such as in Shul or anywhere else, he should take everyone out of his mind (as stated in the first paragraph). If one does this, then even when not alone, he can bring himself to “bitul”.

Parshas Bo
The term מה is often used to infer bitul, as when Moshe Rabbeinu said (Beshalach 16, 7) וְנַחְנוּ מָה, what are we. He made himself into nothing – complete bitul. There are several ways to spell out the letters in the name of Hashem, יקוק. One of those equals 45, the numerical equivalent of מה. This is spelled יוד- הא- ואו- הא, using the letter “aleph”. (Arizal says one should concentrate on this permutation of the Name while reciting Hashem in the Brachas of Sefiras HaOmer, The Degel’s yartzeit is, of course, during Sefira.) The Degel in Parshas Bo explains that a person is made of blood - דם. When you add the א – One, which is Hashem, and “Aleph” represents the “Alufo Shel Olam” – the Ruler of the Worl”, to דם then you get אדם, which equal 45, the same as מה. That’s why this spelling of the Divine Name is spelled with “Alephs”, as opposed to other ways of spelling it without “Alephs”. When one comes to bitul, or מה, then he is the numerical equivalent - אדם.

Praise of the Degel
It says in Parshas Bereishis (5, 1) זֶה סֵפֶר תּוֹלְדֹת אָדָם – “This is the book of the generations of Adam”. The Degel says in the name of Reb Nachman Horedenker that the name of a person is his neshama, soul. The Degel says that סֵפֶר is the numerical value of שֵם (name). Based on this we can say that tell a person’s neshama from his sefer and his name. With the Degel we can literally see his essence in the name itself. Based on this, we can see that the Degel reached the level of bitul mentioned in this article, as the whole previous paragraph is built into first letters of the name of his holy sefer, ד׳גל מ׳חנה א׳פרים, which spell אדם. Now, we can get a hint from the verse זֶה סֵפֶר תּוֹלְדֹת אָדָם – This is the sefer (and name) that will teach us who אָדָם (the first letters of ד׳גל מ׳חנה א׳פרים) was. Then again, the Degel's first name was Moshe, the same as the one who said וְנַחְנוּ מָה. Moshe Rabbeinu was also the midah of Netzach; the Degel’s yartzeit is Netzach of Hod. Also, the numerical value of דגל מחנה אפרים is the same as אדם מפורסם, which can mean “well known אדם”, indicating that it’s known that this tzadik reached the level of אדם, as mentioned. It also teaches us that through the learning of this sefer, one can bring himself to bitul and to the level of אדם. I heard from ASJ that the Degel’s yartzeit is the 17th day of Iyar which is the value of טוב; it is also the 32nd day of Sefiras Haomer – equal to לב. The first letter of his name מ׳שה ח׳יים א׳פרים equal 49, the value of לב טוב, "A good heart". Finally, when one says just the word “Degel” it is known to be referring to the Degel Machane Ephraim. The value of דגל is 37, the same as טובך - the word from אנא בכח that we concentrate on for the 32nd day of Sefira. דגל also equals the value of ז״ל, which of course stands for זכרונה לברכה. That says it all.
May the merit of Reb Moshe Chaim Ephraim ben Reb Yechiel protect all of Klal Yisroel and bring success in all endeavors, materially and spiritual. Amen.
Posted by A Talmid at 5/21/2008 09:30:00 PM

ASJ informed me that נחום איש גמזו is the same numerical value as דגל מחנה אפרים. He asked me if I think there is a connection. After writing this piece, I do see a connection.

When we internalizes the Degel's teaching of Bitul, realizing that there is only Hashem, and of course He only does good, we will be able say "gamzu letovah" to whatever happens in the same manner Nachum Ish Gamzu did.